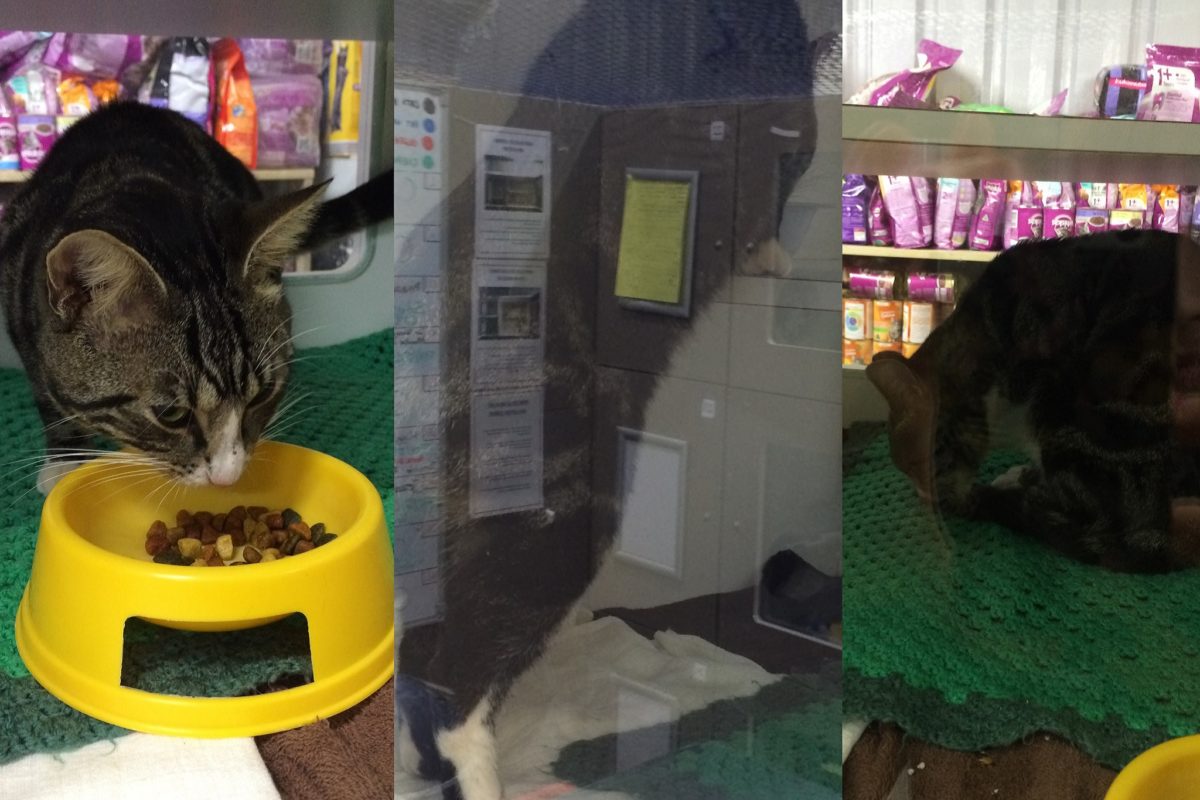 Ok, so I’m not sure who named this handsome white pawed tabby fellow, but I do know that I was drawn to sit & share Reiki meditation with him in early August at Cat Haven WA.  (A cat shelter here in Western Australia).

Sir Binky was sitting huddled in the back corner of his condo, his bedding scrunched up so that only the front of his body benefited from its softness and warmth.  His eyes were questioning.  Wary.  Not happy.

I checked his information sheet and discovered that this sweet 2-year-old kitty had travelled to Perth from Broome- over 2,200 kilometres to find his forever home.  What a journey he must have had.

I said hello, let him know I was there to offer Reiki and gently offered him my hand to sniff, as a greeting gesture.  His eyes softened and he stood so I could pat him, but he was also unsure and his posture was not one of a confident cat.

I straightened his bedding and as he was clearly feeling a little more relaxed I brought over his food bowl and he ate some biscuits while I stood with him, my calm presence helping to confirm he was safe.

I closed the door to his condo leaving him be, sat just outside and entered meditation, dedicating my practice to Sir Binky.  After a few minutes, it came to me that this beautiful boy was desperately trying to make sense of his past experiences.  He was struggling to do so and this was troubling him.

I silently acknowledged that he had clearly already been through so much for his young age, that humans often do not make any sense and this is no reflection on him, as he was always doing his best.  Then I let that insight go and returned to my breath, to my connection to my centre.  To my meditation.

Sitting with Sir Binky this way, expecting nothing of him in return and perhaps offering him a different and more peaceful frame of reference for his future encounters with humans through Reiki is such a beautiful honour.

15 minutes later I opened my eyes to find Sir Binky sitting peacefully with his eyes closed.  I thanked him for his time and let him know I was going to sit with some other kitties in the same shed.

After finishing with the other cats, I returned to check on Sir Binky.  In this time others had been in and out of the shed, doors had banged open and shut and I could see Sir Binky was again feeling on edge.

Knowing that he was open to Reiki, I again sat outside his condo and Sir Binky responded almost immediately by softly closing his eyes.  I entered meditation and after another 10 or so minutes opened my eyes to find him having a huge drink of water.  He then sat peacefully and cleaned himself.

When he was finished, I opened the door to give Sir Binky a pat goodbye, and he rubbed all over my hand and arm, then using pressure leveraged himself to lay on his side; playful, happy and relaxed.  This moment was so beautiful.

Sir Binky had completely let go and was living in and enjoying the present moment.  I smiled and thanked him for sharing this precious side of himself with me, and yet almost instantaneously he realised what he was doing and quickly sat back up again with a look of surprise in his eyes.

Is this not what we all do, to differing degrees?  Don’t we all wish to let go of our troubles and fears, to exist peacefully from our heart; to not worry that others will try to hurt (or direct anger and judgement at) us if we do shine our beautiful lights?

What a wise teacher Sir Binky is.

In form, Sir Binky may be a cat of only 2 years old.  Yet interestingly he had already learned to allow these types of considerations to limit him.  Who else would he have learnt these subliminal messages and ‘rules for existence’ from, than the humans he had previously come into contact with?

How interesting too that the most gentle, radiant and carefree part of Sir Binky, the sweet, soulful shining of his heart, was the part that he was most afraid to share with the world.  Yet the moment that he chose to do so, was also the moment that he felt immensely joyful, peaceful and free.

No wonder Sir Binky was struggling to make sense of our crazy human ways and fears- they are completely counter productive and nonsensical!!

The following week I returned to discover Sir Binky had been adopted, however just a few short weeks later he was returned for not settling in quickly enough.   Clearly it was not the right home for such a special and adorable kitty!  Sir Binky has since been placed in foster care, while he awaits the forever home that he has travelled so far to find.  Whoever his new person may be, I know they will be so lucky to have him and that he will be a caring and loyal companion.  Sir Binky: it was a privilege to meet you.

PLUS: STAY UP TO DATE with blog posts, training dates {learn to MEDITATE- with animals}, exclusive offers & more! :)
Pause will NEVER sell or disclose your information